Gear up for campaign season with these twelve great reads.
Ravi Gupta 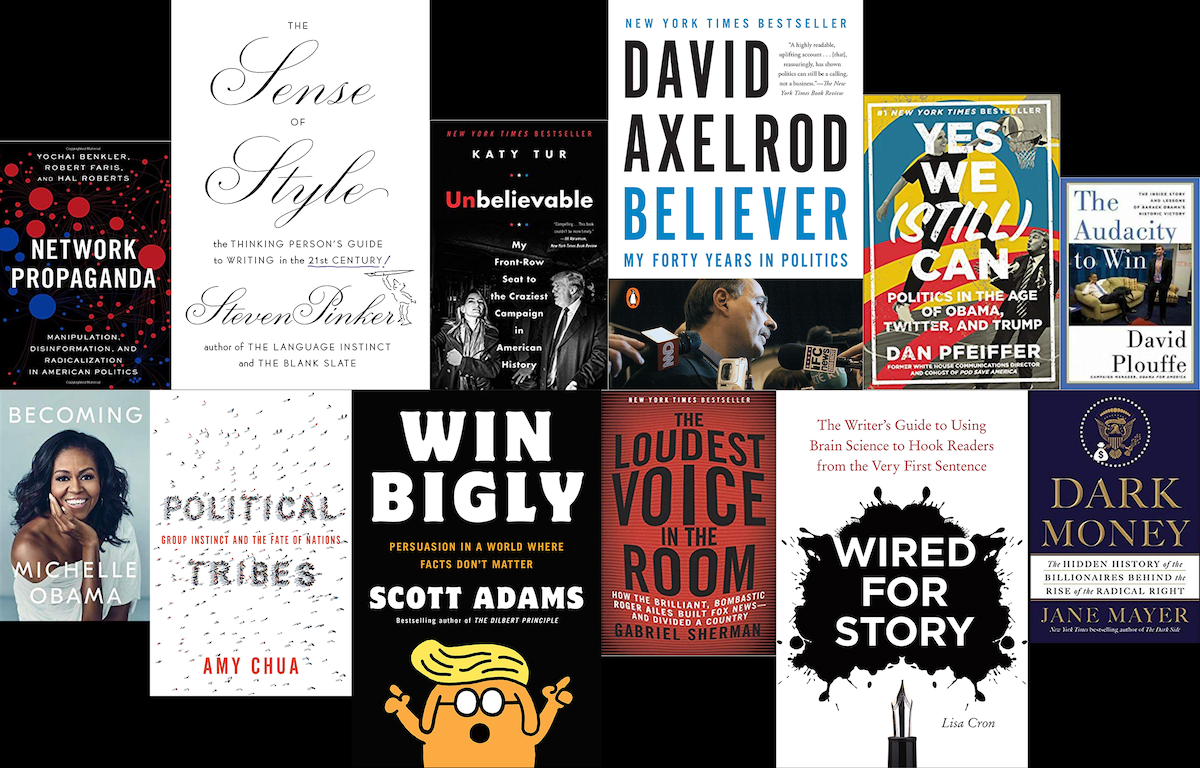 Most summer reading lists are filled with light and relaxing novels that match your ideal beach mood. But we are in the middle of a fight for our republic. So, this summer, I am recommending a different kind of reading list.

At our Arena Academies, we are often asked for background reading to augment the material from our trainings. Since I lead our communications trainings (see here for my post on Communications 101), this list is heavy on that subject matter, but there’s something here for anyone interested in politics and campaigns.

The Sense of Style, Stephen Pinker

This book will help anyone writing campaign speeches, emails, and other core communications to replace cliches and platitudes with fresh, concrete, and resonant prose. Pinker uses cognitive science and linguistics to explain, using examples of both good and bad, what makes strong writing work and poor writing fall short. He provides a taxonomy to help us categorize different types of writing styles while making the case for what he calls the “classical style” at the expense of “academese, bureaucratese, corporatese, legalese, officialese, and other kinds of stuffy prose.”

In this autobiography, President Obama’s former senior advisor takes you on a wild journey through a lifetime of advising candidates—from the tragically flawed to historically inspirational. Along the way, you get a lively portrait of urban politics in America over the past half century. More importantly, you get a sense of how a transcendent communications strategist thinks.

In this staggering work of investigative journalism, Mayer traces the “byzantine trail” of billions of dollars spent by a network of American oligarchs who’ve successfully advanced a political agenda of regressive taxation and lax regulation. This is essential reading for anyone looking to understanding how right wing think tanks, opposition research organizations, media groups, politicians and judges work together to advance an agenda that is largely opposed by the majority of Americans.

How did Donald Trump win? Katy Tur, who followed Trump throughout the 2016 campaign, attempts to answer that question. She documents the litany of Trump campaign lies and intimidation tactics in vivid detail, providing a critical resource for communications professionals looking to predict the tactics of Trump and his down-ballot impersonators in 2020 and beyond.

The Loudest Voice in the Room, Gabriel Sherman

Now the subject of a Showtime TV show, this book chronicles the life of the right wing’s most infamous and influential communicator of the past half century: Roger Ailes. The first half of the book takes you through the evolution of right wing fear tactics from Nixon through the first modern GOP attack machine in the 1988 election. The second half of the book is devoted to Ailes’ work as the founder and brainchild behind Fox News. Sherman walks the reader through Ailes’ successful plan to build Fox News as an arm of the Republican Party—and how the network drove support for the Iraq War and George W. Bush’s election and re-election.

Adams, creator of Dilbert and a Trump supporter, attempts to explain the tactics and strategies Trump used to persuade voters. You may not want to hear what he has to say, but even if you disagree with his findings, Adams’ theories have become mainstream on the right, and we are guaranteed to see an increasing number of GOP candidates adopting the methods he describes. I suggest you check this one out of the library instead of giving him your money :).

This book boasts a “comprehensive overview of the architecture of contemporary American political communications” and doesn’t disappoint. The authors analyzed millions of news stories, television segments, and social media posts since 2015 to provide case studies on key topics, such as the Russia investigation, alleged Clinton scandals, and immigration. They argue that the right wing media environment works in a way that’s fundamentally different than the rest of media (and different than the way media has ever worked) and understanding that difference is the key to combating the radicalism that it spreads.

Yes We (Still) Can, Dan Pfeiffer

President Obama’s former Senior Advisor and Communications Director mixes his (entertaining) personal narrative with a cogent set of lessons from the past few election cycles. He addresses how to fact check in an age of epidemic fabrications from the right, how to drive a winning message when the news cycles are getting shorter and shorter, how to deal with Fox News and other less-than-scrupulous media outlets, and much more.

The Audacity to Win, David Plouffe

Regarded by many as the most disciplined campaign manager of his generation, Plouffe walks the reader through the systems and strategy involved in Obama’s 2008 campaign victory. This is not strictly a communications book, but Plouffe provides key insights into how to ensure a campaign tells a consistent and compelling message through crises.

Professor Chua argues that humans are tribal and that our most salient identities are not national but racial, ethnic, religious, clan-based, and sectarian. Many American blunders, from Vietnam to Trump’s election, resulted in part because of the failure of elites to recognize the power of these tribal identities. She argues that the only way forward is for our leaders to stand up for “a national identity capacious enough to resonate with, and hold together as one people, Americans of all sorts—old and young, immigrant and native born, urban and rural, descendents of slaves as well as descendents of slave owners.” That may be the central challenge of our coming presidential election and the many concurrent down-ballot races.

Michelle Obama’s biography is becoming the best-selling autobiography of all time. It’s an engrossing read: an affectionate portrait of a no-nonsense upbringing, a beautiful relationship not without tough decisions, and insights into the realities of being a powerful woman in the spotlight. The real triumph of this book, however, is the construction of a seamless narrative that makes it feel like Michelle Obama is sharing her life story with you over a glass of wine (the audiobook, read by the author, is all the more real). Michelle Obama’s voice is clear and true throughout, an excellent example for communications directors hoping to capture their candidate’s voice.

Lisa Cron uses evolutionary history and brain science as well as examples across literary genres to paint a picture of effective storytelling. Though this book is meant for writers outside of the political space, all campaign communications teams must be adept at identifying and telling effective stories. This book will help you do that well.