Using your head to build a campaign with heart

Here are five tips for using your head to build a campaign with heart.
Kate Catherall 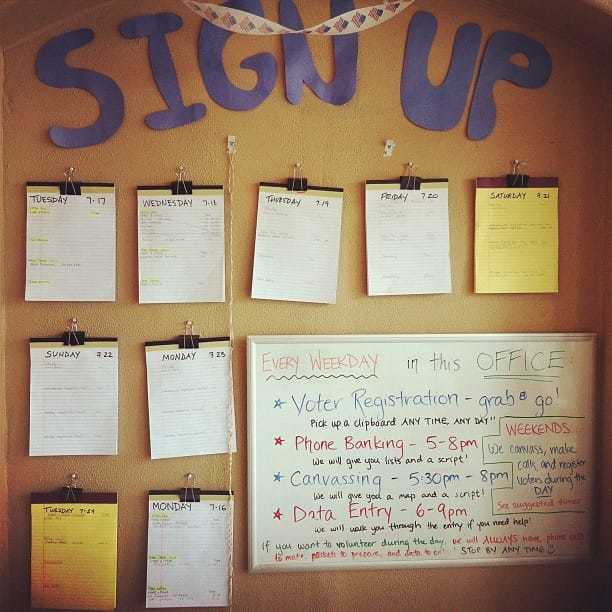 Over the last few months, we’ve spoken with dozens of candidates running for office for the first time. We’ve had many conversations with allies, donors, and campaign managers about what makes campaigns effective, what separates the good from the great, and how to make the very most of limited resources. It feels an apt time for us to lay out a few things about what we believe makes campaigns successful.

Below are five tips for using your head to build a campaign with heart.

Start with your story

And try not to lose sight of its importance over the course of your campaign. People are less interested in the 12-point policy plan than they are interested in who you are and why you’re running. Simon Sinek says it simply: people don’t buy what you do, they buy why you do it.

Your stance on policy issues might tell us what your values are, but your story shows us. Telling your story, practicing it, refining it, and amplifying it should be at the heart of your campaign throughout the cycle — not just in the beginning. Marshall Ganz does a terrific workshop on public narrative, or what he calls the story of “Self, Us, and Now.” Give it a read, write yours down, practice it, and know that this is the most powerful tool in your toolbox. Your story makes you human, it speaks to our emotional brains, and it signals why we should trust you.

Campaigns are all about building trust with voters. They are not battles of ideas, though many would argue they should be. People vote with their guts, not their brains — at least, not the part of the brain you might think.

To build trust, people need to believe that you say what you think and you mean what you say. Be yourself, and remember that the goal is to be the same person in the one-on-one meeting as you are at the party picnic as you are when giving a speech as you are in the video ad.

I vote for the person I trust over the person whose policy platform I most agree with, and so do you. Because we are both humans, and this is how humans work. Our political culture is dominated by poll-tested, focus-grouped, contrived public personas, and candidates who don’t look, act, or talk like real people. Be the exception to that rule.

Today, it is generally understood that talking to voters is important, and it’s becoming conventional wisdom that the number of face-to-face conversations campaigns have with voters is a telling metric. There is now a large body of research by political scientists and practitioners that all points to the same theme: the more personal the nature of the contact, the more effective it is at persuading and activating voters. What is less well known is the infrastructure it takes to build an organization that can scale those conversations, and how to ensure those conversations are effective.

Many campaigns will hire staff that they call organizers, and send them out to knock doors all day long. But that isn’t really organizing; it’s paid canvassing. Smart campaigns invest in hiring organizers whose entire job is to recruit, train, and develop volunteer leaders who will take ownership of campaign programs in their neighborhood. And they don’t organize this way because it’s a nice story — they do it because it’s the best way to scale a campaign’s capacity to reach voters. This is how we move from the impossible ratio of 1 organizer : 1,000 voters to 1 organizer : 5 volunteer team leaders : 100 volunteers : 1,000 voters.

This type of distributed leadership model takes a lot of work. When it’s done well, organizers often spend months arranging one-on-one conversations and house meetings to begin the work of building relationships and moving people to action over time. You can read — in detail — about exactly how we built this on the Obama campaign in 2012, but it’s important to know that this model is not new. While this model has only recently been applied to electoral campaigns, community organizers and social movements have been building power through distributed leadership models for years.

Elections are about trust, and we garner trust via personal relationships. The more personal the touch with a voter, the more likely we are to persuade them and/or turn them out to vote. Organizing is about building and scaling personal relationships. This is hard work and requires up-front investment in relationship-building so that organizers can develop and empower leaders who will effectively put them out of the job. Another way to put it — an organizer’s job is to replicate herself. Don’t hire organizers and make them paid canvassers — you’ll be doing yourself and your campaign a great disservice. And for what it’s worth, it is a nice story. This is your campaign’s legacy in the community, win or lose.

Meet them where they are

Sometimes, when we talk about meeting people where they are, we mean it literally. Not Joe Biden literally. Literally. You are probably most familiar with the application of this principle in the digital space. Where are they having political conversations online? Where do they read their news, and how many will open an email from you? Who are the influencers best positioned to speak to your target audiences, and how might they validate you and lend you credibility?

However, the “offline” application is important too. Remember, campaigns are about trust. Trust is about relationships. And the most meaningful relationships are made face-to-face. Where are your voters in their communities, and how can you physically meet them there? Do your voters congregate in barbershops and beauty salons? Grocery stores? Farmer’s markets? University campuses? When I was an organizer in Weld County Colorado in 2008, we realized that the best place to meet unregistered voters with some time on their hands was to go to laundromats and Walmart parking lots, so we grabbed our clipboards and showed up with voter registration forms.

The figurative application of this principle might be the most important one — how can we deliver a message meets people where they are? What message is both authentic to you and will resonate with voters in your district? How can you deliver your message in a way that will reach them, and resonate? Understanding your audience will help you tailor your communications to break through the rest of the noise and really connect. If you’re running in a district where reaching out to voters across partisan identities is important, then I highly recommend you take 12 minutes to watch this talk by Robb Willer, who explains “How to have better political conversations” using moral foundation theory.

Don’t waste all your money on direct mail

Campaigns are spending way too much money on way too many direct mail pieces, and the science simply doesn’t support it. In the last few months, I’ve spoken with numerous candidates at both the state and congressional level who have been encouraged to send as many as 20 – 30 pieces of mail to voters. Now, to be fair, this mail is typically going to two different universes (lists) of voters: the first is a persuasion universe of high-propensity voters (likely to turn out) who are undecided, and the second is a turnout universe of voters who are likely to be supportive, but are only somewhat likely to turnout to vote. Even if mail were split among these two universes evenly, we’re still talking about individual voters receiving 10 – 15 pieces of mail.

That sounds like a lot because it is, but this is hardly unusual for campaigns — particularly smaller-scale races that have traditionally depended on mail in lieu of robust organizing programs. The problem is that the large body of research on direct mail shows diminishing returns after 6 – 8 pieces. What’s more, we have very little evidence that persuasion mail works, and only very specific approaches grounded in behavioral science (like plan-making, pledging, social pressure, and evoking social norms) have been proven effective when it comes to turn-out mail.

So why are campaigns continuing to waste so much money on so much mail? I think there are a few reasons, not the least of which is that direct mail is one of the most profitable industries in politics, and mail vendors have a vested interest in keeping it that way. There’s also the fear of being the one who rejects conventional wisdom, breaks from doing what’s been done because it’s what we’ve always done, and gets it wrong. And we’ve all heard the argument, “you know the other guy is going to do it.”

Our advice? Mail is an important component of any campaign, but go for quality over quantity. Work with your vendor and creative team to design pieces that are grounded in the research. Send some mail, but no more than eight pieces under any circumstances (four for persuasion, four for GOTV). And remember — everything your campaign does is about building trust with voters — so only send mail you’d read yourself. If your instinct is to throw it straight in the recycle bin, listen to that.

The pundits, consultants, and analysts have a tendency to get hung up on tactics and technology. And tactics and technology absolutely matter. But too often, we are standing too close to the painting, and missing the bigger picture. Campaigns succeed when they build trust with voters. Trust is garnered when candidates exude authenticity, and when their campaigns a take a thoughtful, holistic, and intentional approach to building and scaling personal relationships with voters.