How We Won the Arena Cup 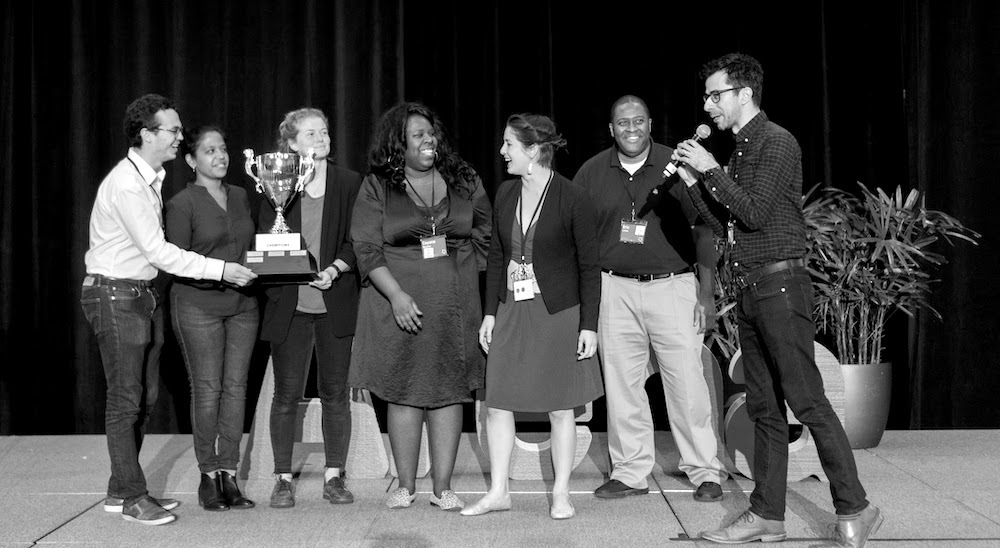 The Arena Academy Charleston managed to encapsulate all that is magical, grueling, complicated, and empowering about campaigns. In a five-day whirlwind of workshops and conversations, a talented group gathered to figure out how to build and sustain the progressive movements that will shape American democracy for years to come.

For the last 24 hours of the conference, each team had the opportunity to build a winning campaign for an assigned race. We were encouraged to be bold and creative, and warned that—much like a real campaign—we would be limited in time and resources. This became evident as we found ourselves huddled in a dark hotel conference room, well past midnight, around a table of crumpled papers, glaring laptops, and chips & salsa.

We wrestled with so many decisions. How were we going to shape our candidate’s story while being realistic about our opponent’s strengths? How would we live up to our progressive values by paying our staff livable wages and hiring locally, while making the most of each dollar in our limited budget? How should we run the numbers to build a realistic and innovative voter universe? Ultimately, how were we going to tie it all together into something that made sense for our judges?

The criteria included creativity, integration, strategy, and teamwork. This last one was particularly notable: it soon became evident we had different personalities, working methods, and communication styles. All those skills we had learned in our management and team culture workshops suddenly seemed much more difficult in practice. But of course, this is where the true learning happens – in moments of stress, frustration, fatigue, anxiety. This is where we remind each other to listen, to be patient, to take a breath and remember the bigger picture. This is where we learn leadership and collaboration, and that truly the only successful path is the one we’re all on together.

Two hours before our presentation deadline, the flow finally kicked in. The slogan, the narrative, the volunteer capacity plan, the data sets, the digital strategy all began to click. Before we knew it, we were standing in front of the judges. An hour later, we somehow ended up on stage celebrating our win of the Arena Cup.

We ended up getting the highest overall score to-date in the Arena Cup. Ironically, we got a perfect score in teamwork. As our fearless Campaign Manager, Cayana, said as we took the stage, “We always did so well when we came around the table together and listened to each other.” In fact, we became so in sync that, without planning, we all wore perfectly color-coordinated blue & green outfits on the last day (which conveniently became our campaign logo colors). Perhaps it was the aesthetics that won over the judges, but that alone was a testament to our collaboration and solidarity.

The Arena Cup was stressful and a lot of work, but it was amazing to see all our strengths come together to create a winning outcome. I’m not always the loudest or the most aggressive person in the room, but I can encourage people to lead in their area of expertise. I used my leadership style to bring our team together.

Before coming to Charleston, I’d worked as a Field Organizer for Stacey Abrams and as a Campaign Manager for a city council special election in Atlanta. Both times, I learned my role as I went. Coming to Arena not only gave me the tools and resources to be successful, but also, it gave me a network of support. Arena was a life-changing experience for me because it solidified that I wanted to pursue a career in political campaigns, and now I have the resources and network to make it happen.

“We worked well together, we respected each other, and I believe this was the key to our success.”

Before Arena, I’d been a Campaign Manager for a U.S. Congressional campaign primary and for an Arizona State House campaign. I came to the Academy because I wanted to level-up my campaign skills. I left feeling like I accomplished what I set out to do.

I had a couple of friends who attended the Academy in Des Moines, so I’d heard about the Arena Cup competition. While I understood what it was, you can’t truly appreciate it until you experience it for yourself. In a compressed period of time, you have to draft a winning campaign plan—not much unlike a real-life campaign environment. As the Data Director, my role was to provide the voter data that would enable our team to make the smartest and analytically-based decisions for our path to victory. While there were challenges working under tight time constraints with people we only recently met, I was lucky to be on a team of stars. We worked well together, we respected each other, and I believe this was the key to our success.

On the very first day of the Communications Director track, I learned that, in order to impact voters, a candidate’s story has to be real (accurate), relevant (important to voters), and resonant (engage on an emotional level). As my Arena Cup team’s Communications Director, my job was twofold: make sure our candidate’s story impacted potential voters, and ensure that our presentation as a whole impacted the judges. We knew that most teams would present with the frame of how they “would win an election.” Instead, we framed our presentation as if we were coming back to Arena in 2021 after already winning our district. It worked: we were able to increase the relevance and resonance of our presentation and connect with our judges.

As Finance Director, I remember getting caught up in whether my numbers were “realistic.” My team was similarly exacting about every detail of the plan, which led to us putting together our presentation at the eleventh hour. We ran through once with heavy edits, and then it was time to report to our competition judges. What we found—in that blur of minutes that constituted our presentation—was that all the work we’d put in behind the scenes meant that everyone knew their part by heart. Even if we were winging the presentation a little, we nailed it. It was a thrill to win – but more than that, I was honored to be able to work beside my own team members and the many other incredible teams of activists in Charleston.

As a social psychologist with a background in persuasion, I joined the Digital Director track to learn how digital tools can help campaigns refine their targeting and messaging more effectively. My biggest challenge in the Arena Cup was that digital is inherently integrated with all the other departments. There was not one required section for a digital plan; instead, we were judged on how well digital was incorporated throughout the campaign. That led to confusion or conflict at times over task ownership. Luckily, we had an amazing Campaign Manager and a collaborative mindset on our team, which allowed us to all work well and creatively with one another.

“The Arena Academy reminded me there’s no way I’ll ever step out of the arena.”

The Arena Academy is doing an excellent job at what all campaigns should be about in the first place: empowering the next generation of community organizers and leaders. Throughout the Arena Academy, the wonderful staff reminded us: “Be Excellent.” They practiced what they preached: We took time to give kudos to each other, to give thanks before breaking bread together, to dance and stretch together, and to state our values every morning before starting the work of the day.

We did not shy away from difficult conversations around identity and privilege and power. We built safe spaces for honesty and vulnerability. If we can build our campaigns like this, I’m confident the movements our generation has started to build will create lasting, systemic change, while empowering countless new progressive leaders along the way. It is a thrill and an honor to be a part of this community, and the Arena Academy reminded me there’s no way I’ll ever step out of the arena.